CCEDC’s Annual Event Held on May 18 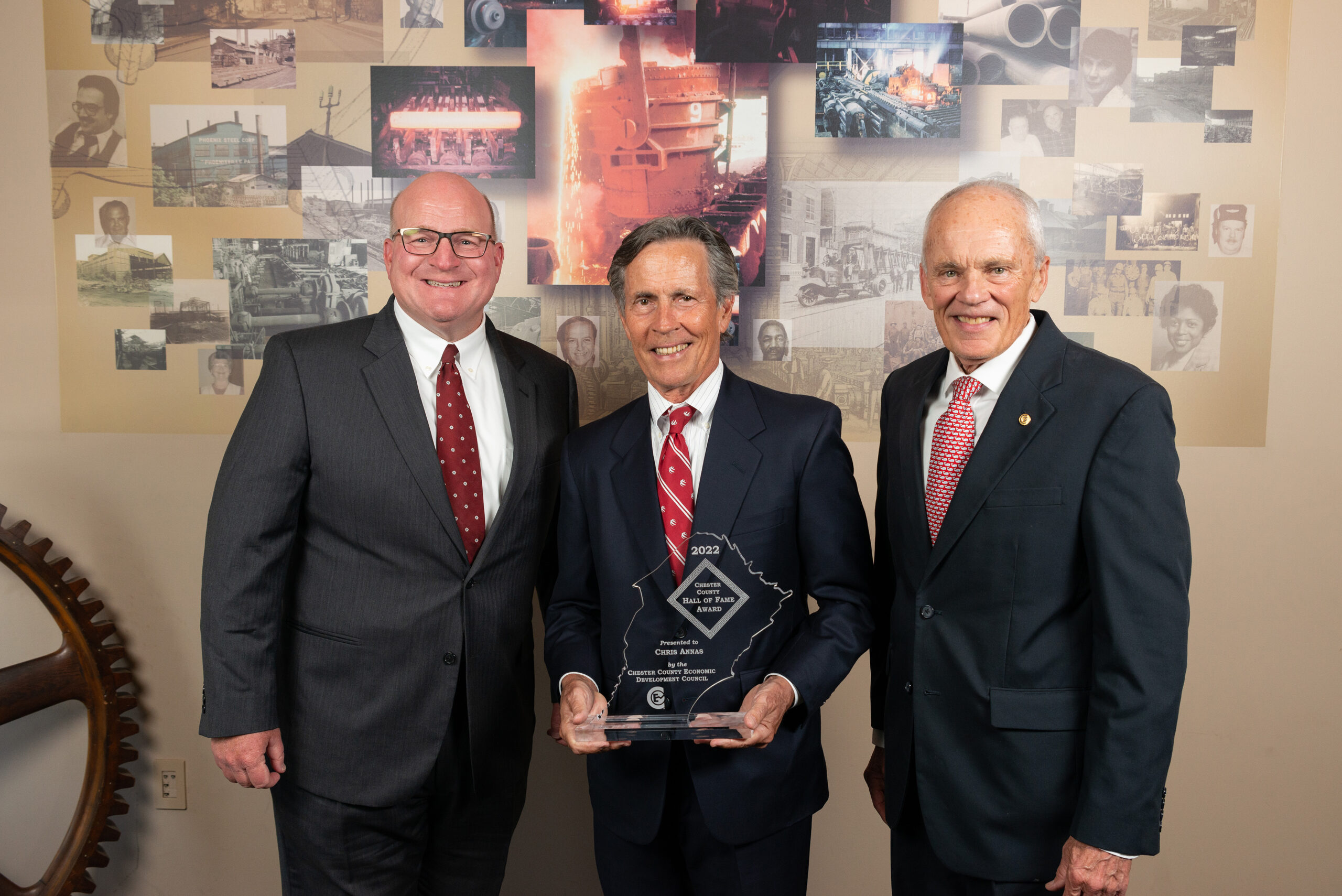 With more than 400 of the region’s top business and community leaders gathered together, the Chester County Economic Development Council (CCEDC) inducted Meridian Bank Founder, CEO and Chairman of the Board Chris Annas into the Chester County Hall of Fame.

“I’ve worked with Chris almost my entire career in Chester County spanning 46 years, and I can tell you, firsthand, that he demonstrates extraordinary quality of leadership, community participation, as well as compassion and commitment to his profession and his employees,” said Gary Smith, CCEDC President and CEO. “Chris empowers others. He also has the ability to unearth potential in the businesses he encounters, as well as the people. He has built a great, hands-on institution that gets transactional business accomplished.”

CCEDC’s presentation of the Chester County Hall of Fame Award was held at the Phoenixville Foundry on Wednesday evening, where Annas was honored for his indelible mark on the county’s banking sector, including more than 30 years of banking service to thousands of local businesses as well as Meridian’s more than 300 employees.

Among Annas’ many achievements, Smith recalls a collaboration with CCEDC on an unprecedented solution for what would become one of Chester County’s largest employers. CTDI was the name of the company, and Annas saw its promise from the very beginning.

“This was the 1980s and up to this point, we were never able to combine federal and state financing programs to develop growing businesses. But Chris and I worked together to introduce CTDI to this brand new loan program called the SBA 504. With it, CTDI was able to move into its first facility that it built from the ground up. We cut new ground, and it rippled across the Commonwealth,” Smith said.

Annas is the founder, chairman and chief executive officer of Meridian Corporation, headquartered in Malvern, Pennsylvania. Meridian is a $2 billion bank with more than 20 offices across Pennsylvania, New Jersey, Delaware, Maryland and Florida since launching in 2004.

Annas grew up in Minneapolis, before moving to Berwyn at the age of 15 and playing rugby for Conestoga High School. His family had roots in the Philadelphia area, with his father from Norristown and his mother a graduate of West Catholic High School. Annas recalls working at the Thriftway in Paoli, Open Hearth Restaurant and as a bellhop at the Sheraton Valley Forge. He went on to attend Penn State and helped pay his tuition by working 1,500 feet underground in a Wyoming mine.

Even with vast corporate success, Annas finds his passion continues to be cultivating emerging growth businesses. “I’ve always enjoyed the entrepreneurial side of banking. We get to understand how companies get started, make money and impact their communities. We help them finance these dreams and then watch as they grow their business and become successful.”

Annas’ service extends beyond his distinguished career into the many philanthropic causes he has supported. Hs serves on the Foundation Board of Paoli Hospital and on the Community Bank Council of the American Bankers Association. He is a former board member of the Chester County Chamber of Business and Industry and of the People’s Light and Theatre Company.

“Three ‘Cs’ come to mind when I think of Chris,” said Smith. “Creative – he’s always going beyond the numbers to find a solution. Compassionate – he’s really attuned to the growth of a company and is a true advocate. Committed – if Chris is involved, then he is fully and completely committed.”