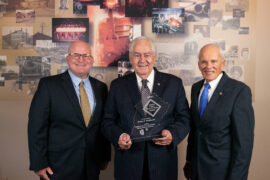 More than 300 of the region’s top business leaders were in attendance as James E. McErlane, Senior Partner and Founding Member of Lamb McErlane PC, was inducted into the Chester County Business Hall of Fame by the Chester County Economic Development Council (CCEDC) Wednesday night.

“From his service in the U.S. Navy and on many civic and community boards, to his highly-regarded legal career, Jim McErlane’s impact on Chester County and the region is unparalleled,” says Gary Smith, CCEDC President and CEO. “Jim has truly become an icon in our community.”

The Chester County Business Hall of Fame Award recognizes an individual’s outstanding achievements and contributions within the local business community. Wednesday’s award presentation was at the Phoenixville Foundry, where McErlane was celebrated for more than 50 years of providing superior legal counsel to businesses as the county underwent a remarkable transformation from rural community to booming business corridor.

Jim began his legal career as a JAG in the U.S. Navy in 1967, serving on active duty for almost three years including in Vietnam. “My years in the Navy were one of the great experiences of my life,” says McErlane. “My first airplane trip was wearing a blue suit with gold buttons.”

The son of immigrants, with grandparents hailing from Ireland and Italy, McErlane was born and raised in Malvern. He attended St. Patrick’s Elementary School and recalls only 13 people being in his 8th grade class “with a couple of kids who milked cows before coming to school.” McErlane went on to earn a scholarship to attend Malvern Prep, eventually attaining his B.A. from Villanova University and J.D. from Villanova Law School.

Fast forward to McErlane’s navy career, which would land him in San Diego, wearing his navy dress whites when he met his future wife Robbi during a May Day celebration. A year later, Robbi would move east to marry Jim as he got his first civilian job at a West Chester law firm. After just a few months, the firm reorganized to become Lamb Windle McErlane. Five decades later, now Lamb McErlane is 42 attorneys strong and growing, fueled by McErlane’s renowned full service law practice that includes business law, banking, finance and real estate.

“It has really been an honor to guide so many successful Chester County businesses, structuring transactions and assisting them with the banking and loan documents that enabled them to grow,” says McErlane. “We’ve had the benefit in Chester County of a rising tide lifting all boats. It continues to be a place where if you work hard and put in the time, you have a good opportunity to be successful, raise a family and send your kids to college. I commend Marian Moskowitz and the Chester County Commissioners for their leadership and dedication to serve our community.”

Jim has been actively involved with the Boards of many organizations over the years, including when he joined the board of CCEDC in 1980, shortly after CCEDC President and CEO Gary Smith was hired. “Gary is a phenomenal guy – a legitimate, real farmer who promotes economic development while being a conservationist. It’s remarkable,” says McErlane.

McErlane is particularly proud of his more than 30 years of work with the March of Dimes as well as his appointment to the Pennsylvania Supreme Court’s Judicial Conduct Board, where he served a term as Chair of the Board. McErlane has also served on the Board of Directors of the Chester County Community Foundation, Philadelphia Regional Port Authority, Chester Valley Bancorp, Paoli Hospital – Community Volunteers in Medicine, Board of Consultors of the Villanova Law School, West Chester University Foundation, Boy Scouts of America – Chester County Council, Chester County Food Bank and Chester County Library Trust. Among his many awards, McErlane has received the President’s Award from West Chester University as well as been recognized by the Southeast Pennsylvania March of Dimes for over 20 years of service and commitment. He was also the recipient of the Legal Intelligencer’s 2021 Professional Excellence Award for Lifetime Achievement and the Philadelphia Inquirer’s 2019 Influencers of Law for Lifetime Achievement.

McErlane recently celebrated his 50th wedding anniversary with Robbi, his children Bonnie and Lisa, as well as his two grandchildren. He attributes his success to the support of his family as well as his Lamb McErlane colleagues and friends across Chester County.

“Nobody does anything without a great deal of help. We went through tough times over the years, and some great times. Everybody’s life has those experiences. Keep working, keep plodding and don’t give up,” says McErlane.