If you have ever been to the Chester County Economic Development Council’s offices in the Eagleview Corporate Center, most likely you’ve been greeted by the flame-haired, vivacious woman behind the front desk, Kathleen Nader.

For the past twelve years, she has been making the first impression on behalf of CCEDC. 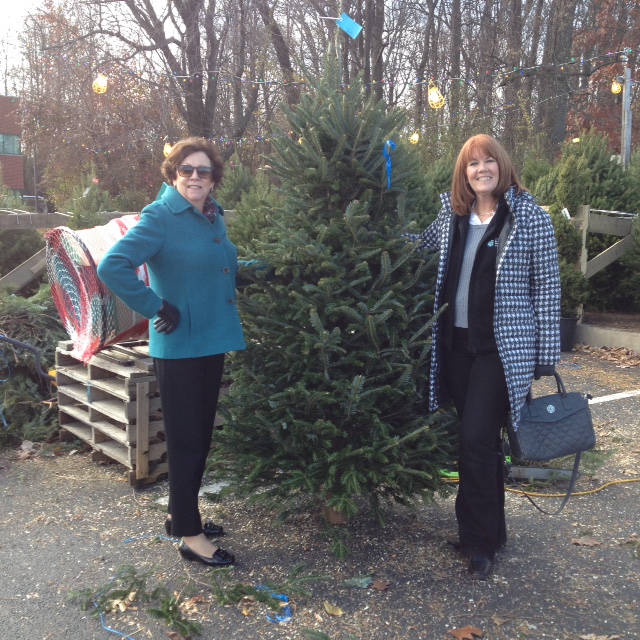 As Facility Manager, Kathleen makes sure the day-to-day operations run smoothly, oversees the company’s IT and handles facility rentals.  She is also the driving force behind the organization’s charitable contributions by organizing blood drives, food drives, and “adopting” children at the holidays.

This past year, her efforts helped yield 35 pints of blood donated to the American Red Cross, 1,685 pounds of food contributed to the Chester County Food Bank, and roughly 30 children from the Tick Tock Early Learning Center received holiday gifts.

According to CCEDC’s Executive Vice President and Chief Operating Officer, Mike Grigalonis, “Kathleen plays a vital role for CCEDC.  She is, in many ways, the face of CCEDC.  There is not a stakeholder of CCEDC or Seedcopa who does not interact with Kathleen in some way.

Whether it’s through facility rental, attending a meeting, participating in one of her many charitable initiatives, or simply calling to say “hi” – all roads go through Kathleen!  She does an amazing job and always with a smile.”

Kathy Field, CCEDC’s Special Projects Director echoed those sentiments, “Kathleen greets everyone who walks through the doors of CCEDC with a huge hello and warm smile; she represents CCEDC well and we are forever grateful for her and her work ethic.”

In the first two weeks of December, Kathleen was instrumental in organizing a 60 Days of Giving food drive that netted another 1,062 pounds of food, the fourth blood drive of the year which yielded an additional 14 pints, and putting up the holiday tree so the gifts for the children can be placed beneath it.

Given her impact on the organization, especially at this time of the year, Weekend Edition sat down with Kathleen to get to know her a little better.

Weekend Edition: Can you tell us about your childhood?

Kathleen Nader:  I grew up in Delaware County in a big Irish Catholic family in which I was the third of seven kids.

WE:  What was your career path before landing at CCEDC?

KN: After high school I attended the Gordon Phillips Beauty Academy in Upper Darby and went on to work at Barry Leonard’s in Center City and then at a salon inside Caesar’s in

Atlantic City. After I got married I worked as a shift manager for a restaurant inside a Days Inn near the airport then after I had kids I did a little waitressing before moving into floral design and interior landscaping.

WE:  How did you end up in Chester County?

KN: While I was working in Atlantic City I met Eddie Nader who is from South Philly.  The night we met, he went home and told his mother that he had “met the girl he was going to marry” but I took a little longer to agree with him.  After we got married we decided to settle in Delco to be near our families.

Eddie, who grew up in South Philly and Kathleen, the third of seven children from Springfield, Delaware County, met in Atlantic City.

After some time had passed and two kids joined our family, we started to outgrow our home.  A friend in Chester County told me to move out here because of the nice homes and great schools.

We took a look and realized that not only did the area have award-winning schools but that it is just a beautiful area that is two hours from the shore and two hours to New York City or Washington, DC. So when our son, Andrew, was ten and our daughter, Aubrie, was 5 we moved out to Downingtown in 1996.

Weekend Edition: How did you land at CCEDC?

Kathleen Nader:  My kids and Kathy Field’s kids went to school together and our daughters played field hockey together.  She was working at CCEDC and told me they were looking for a Facility Manager.

Over the years, my job has evolved from greeting guests and managing rooms to overseeing IT, facility management, vendor relationships, and community outreach in addition to helping plan CCEDC’s three signature events – our golf tournament, Stakeholders’ Breakfast, and Business Achievement Awards Dinner.

Weekend Edition: What do you like about working at CCEDC?

Kathleen Nader:  Location, location, location – because I work about one mile from home which is wonderful. Plus, the CCEDC Team is great and I really enjoy working with everyone. I like my ever changing responsibilities. It keeps me on my toes and my brain fresh.

Weekend Edition: What might we be surprised to learn about you?

Kathleen Nader:  That I play the harmonica and that I love to travel.  Our most recent trip was to Montauro, in the Calabria region of Italy.  This was my husband, Eddie’s, first trip to Italy and this is the village where his mom’s side of the family, the DeBenedetto’s had lived before coming to the US.

While we were there, we met the mayor of Montauro who told us the story of how in 1929 the village’s statue of St. Panteleon traveled to Philadelphia for a religious festival and never returned. The village has been searching for years for the missing statue and even sent a delegation to Philadelphia in 2015 to try and find it.

Eddie and I both gave each other a look because we have in our house a statue of St. Panteleon.  It turns out that back in 1929 the statue was left behind in the care of the DeBenedetto family, Eddie’s relatives, until the villagers from Montauro could arrange for transport back to Italy, during the next eight decades, the statue was cared for by Eddie’s great-grandmother, grandmother, and mother in South Philadelphia before coming out to our house in 2012.

Needless to say, upon hearing the news that the statue had been found, the entire village turned out to meet us!  We are currently in negotiations to return the 4.5’ statue and will travel back to Italy to see it placed in its designated place of honor.

Kathleen and Eddie Nader hope to return the 4′ 5″ statue of St. Panteleon to its home in Montauro, in the Calabria region of Italy.

Weekend Edition: If you weren’t working at CCEDC, what could you see yourself doing?

Kathleen Nader:  I would definitely travel more, playing more golf, and spend more time with friends.  I really would love to do interior design and be like the Fixer Upper folks from my beach side home.

Please fill out the form below and we'll get back to you in two business days.